Tapping a Different Channel with Near Field Communication (NFC) 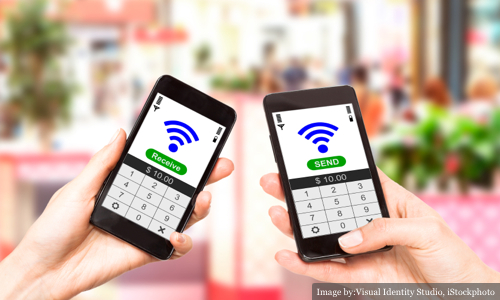 Tap your phone on a near field communication (NFC) tag, and instant, rich, multimedia content is at your disposal. Tap two NFC-enabled smartphones together, and financial transactions can be conducted instantly; or by using apps like Google Wallet or PayPal, purchases can be accomplished entirely by smartphone.


NFC is slowly gaining public acceptance despite the limited number of smartphones that are currently NFC-enabled. In fact, the NFC user base is almost entirely Android-based. This is largely because the back of the iPhone's metallic case blocks the radio signal required to make the NFC handshake. It’s also possible to retrofit some phones with a SIM card that has an NFC chip embedded on it. In fact, Berg Insight predicts over 700 million NFC devices will be shipped by 2016. So, will the convenience and speed of this technology drive a universal acceptance on par with the quick response (QR) code, or is it merely a transitional technology leading to the next best thing?


If NFC sounds a lot like QR codes in terms of capabilities, it is not without reason. Both technologies provide a way to bridge the physical world with the digital. Both provide data storage and can initiate rich, multimedia marketing experiences. The key differences are cost, flexibility and ease of use. Cost is an obvious differentiator, as QR codes are virtually cost-free and can be used and recreated as often as needed whereas high-end read/write NFC tags can become quite expensive for large campaigns. Most current uses for NFC employ less expensive passive NFC tags. QR codes are static graphics and cannot be reprogrammed without being recreated. Hence, keeping product packaging current with QR codes presents logistic issues. On the other hand, when a NFC tag needs to be updated, in most cases, it can be reprogrammed using an NFC write-capable device. When it comes to ease of use, NFC tags easily outperform QR codes. Using a QR code requires taking a picture of the code and using an onboard smartphone application to interpret it. NFC is based on proximity radio frequency identification (RFID) technology. So when a suitable device enters the perimeter defined by the tag’s RF signal, the device instantly responds appropriately. To avoid overlapping fields, many tags require physical contact between the reader and the tag, i.e., a tap.


While nowhere near as ubiquitous as the QR code, more and more companies are adopting NFC technology for a multitude of reasons. Lexus created quite a marketing stir last year when they released a NFC-enabled advertisement in half a million copies of WIRED magazine. Sony has embedded NFC technology in cameras, laptops and smart watches. Samsung is putting them in laser printers, and merchants in Tokyo are using them for coupon distribution. In Europe and Russia, NFC is becoming widely used for ticketing, payments and universal identification. Adidas embedded a NFC chip in a running shoe that enables the purchase, registers the shoe to its owner and even works with an app to track the owner’s use of the shoe. The Château Le Pin winery in France uses NFC tags to verify the vintage of its famous and costly wine with a simple tap. As time goes on, we’re going to see more and more unique and innovative uses of the NFC tag.


As with QR codes, getting the tag out in front of the audience and having them tap/scan is only half the battle. Clearly, the mentality of the typical smartphone user is not tuned to waiting and to delayed gratification, so the resultant content must be instant, relevant, interactive, informative and engaging. I think the Lexus ad is an outstanding example of all of the above.

I think that every marketing executive considering using NFC should study this piece. Also, I believe the Adidas shoe tag bears some analysis as well, as it provides perceived value to the customer through the added features enabled by the tag while simplifying the sales process and gathering useful demographic information from the purchaser.
I don’t believe the NFC tag will completely replace the QR code and other printed, static data symbols. For most purposes, the QR code provides plenty of bang for no cost. However, when a more sophisticated sales and marketing effort requires an interactive means of bridging the physical and digital worlds to push marketing content and enable the complete sales cycle, the NFC tag should be given serious consideration. Still, I’ve barely scratched the surface of the technology here. To get a more complete look at the technology and capabilities of NFC, I recommend reading the material available at the following sites: www.smartcardalliance.org, www.nfc-forum.org or www.nfcworld.com.

Why 75% of Insurers Are Adopting E-Signatures Next

Design Thinking Puts the Customer Back in the Driver's Seat: Hold On to Your BPM Previous
More from FEATURES