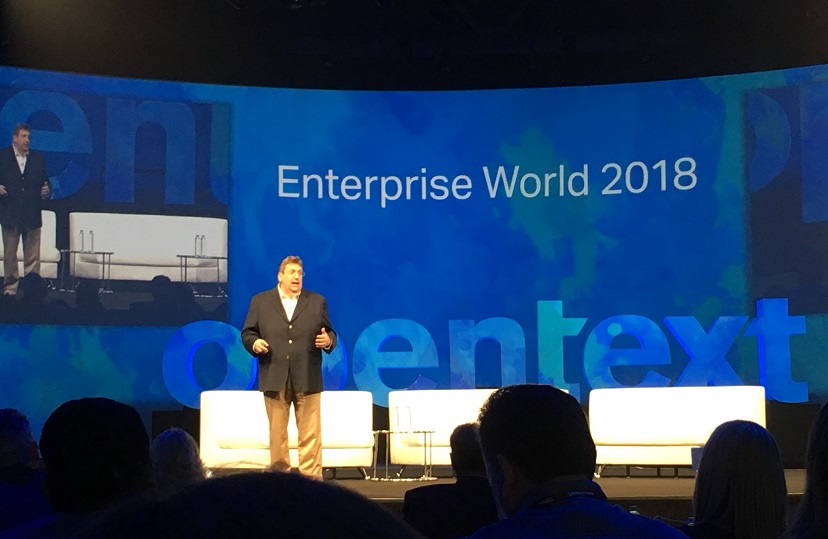 UPDATED 6:38 PM, July 11 - At Enterprise World 2018, OpenText CEO Mark Barrenechea proclaimed in front of a crowd of 4,000 attendees at their annual customer conference, “We are reborn in the cloud,” and so it seems. Today, OpenText unveiled their next-generation, hybrid-cloud platform OT2 (otherwise known as Project Banff). Built from the ground up, the native software-as-a-service (SaaS) platform marks OpenText’s foray into the public cloud arena.
OT2 boasts one data model, a consolidated tech stack, and enables organizations to rapidly build SaaS applications in OpenText Cloud, which are supported by micro-services for content collaboration, security, process automation, and analytics. OpenText says that applications in OT2 will be tightly integrated with Release 16, allowing organizations to leverage their existing OpenText investments with pre-built applications for a hybrid approach.

“We think there are a set of workloads that is just suited for public SaaS, like Core, Hightail, some of our capture services, archive, digital asset management,” said Mr. Barrenechea in an on-site briefing. We expect to see OpenText continue to grow the functionalities of this new public SaaS offering.

OT2’s platform is made up of common components from Cloud Foundry, Kafka, Elk, New Relic, containers, PostgreSQL, and Apigee, coupled with a micro-services architecture wholly developed by OpenText. Some of these new services leveraged by OT2 are based on several acquired products over the years, such as EMC's Leap and InfoArchive, Cordys, and Covisint. Savinay Berry, Vice President of Cloud Services at OpenText, says that these acquisitions allowed them to accelerate their SaaS offering by at least five years, but he is quick to emphasize that OT2 "is a completely new, modern technology stack. It's not something that we've leveraged for the last 25 years. It's something we built from the ground up, and it's flexible and modular." Once again, Mr. Barrenechea reiterated OpenText’s commitment to acquisitions as a central part of their total growth strategy—of which the new platform will play a starring role.

In Toronto, Muhi Majzoub, Executive Vice President of Engineering and Cloud Services at OpenText, told us, “As we acquire new companies, OT2 gives us a platform to integrate [these assets] much faster now, because we have the platform and standards. The only thing that’s required is to deliver the content services and user interface widgets associated with these microservices and make them available through our developer catalog to basically develop these new components.”

This latest public cloud addition joins OpenText’s business network, on-premises, and private cloud managed services offerings. OpenText seems committed to all four environments, with Mr. Barrenechea stating that some companies in highly regulated industries will never go to the public SaaS environment. With over 2,000 customers in their private cloud managed services business, OpenText announced that Release 16 is fully containerized and can run on Google, Amazon Web Services, and Microsoft Azure. Mr. Barrenechea commented on the news by saying, “We believe that’s going to open a new market for us.”
At Enterprise World, OpenText also announced a new pricing model to simplify consumption of their managed services by offering Prime Unlimited. At $99 per user, per month, this option offers access to all OpenText enterprise software and use of their private cloud managed services. Currently, the capabilities of their public SaaS offering are based on a separate subscription model and are not combined with Prime Unlimited for their managed services.

OpenText OT2 is available immediately and is set to develop with quarterly releases.
Allison Lloyd serves as the Editor of DOCUMENT Strategy Media. She delivers thought leadership on strategic and plan-based solutions for managing the entire document, communication, and information process. Follow her on Twitter @AllisonYLloyd.